My friend Isha and I were in Valencia for a month and we were studying at Hispania Escuela de Español. We lived with a spanish host family (Manoli Martínez) and it was a marvellous experience. The family provided us with everything we needed. They made sure we are comfortable and always were excited to cook new things for us. They did not even once made us feel unimportant. I would definitely recommend this family because it really takes care of your needs. We also met people from different countries and it was fun to spend time with them. The school has its exciting way of teaching. The professors let you participate in the activities and make sure you understand the topics. They take an effort of explaining again if you fail to understand any topic. The atmosphere at the school around other foreign students is also very comforting. Everybody welcomes you and make you feel home. The school also has their excursion programmes and they take us to visit beautiful places.
As a city, Valencia is a very beautiful place to be. The pleasant climate, orange trees, culture and tradition, places to visit, everything is so wonderful that you’d not feel like returning home.
I would definitely like to visit Valencia again and I dream of working there someday! 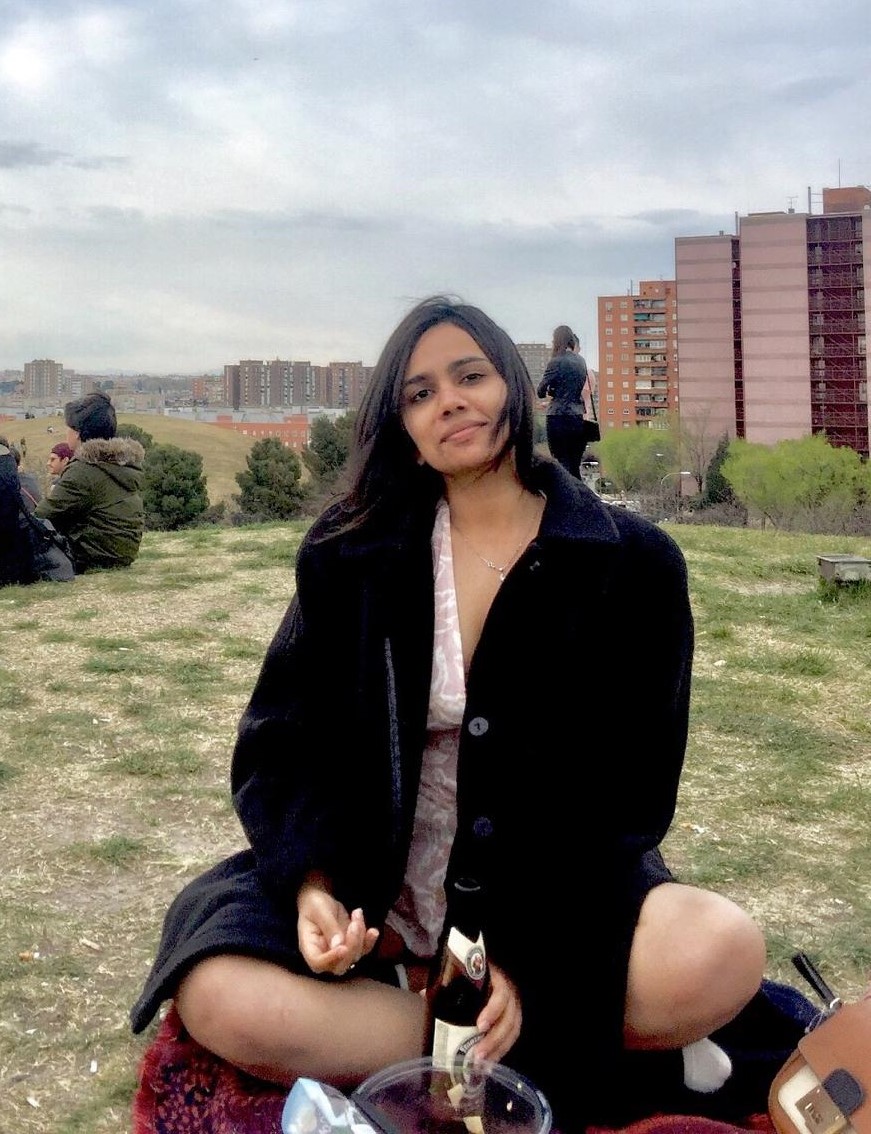 Imagine a place where there is freedom to be you and well that for me is Spain. I spent three months living in the heart of Spain; the beautiful Madrid. After finishing all my levels in India from Academia de Español, I went to Madrid to improvise on the other aspects of the language. I believed that the best way to learn a language is to be living in it’s land. I was studying in Ail Madrid which is in fact the most known school to learn Spanish. I didn’t need an alarm in the morning to wake me up, well, that is how much I loved going to school. All my teachers were fantastic! Grammar is only a part of language and the most I appreciated about this school was that they focused on all the aspects of the language. I spent three months living with a Spanish family and my landlady was a fantastic woman. She took care of me just as my mother and made me feel like home in her beautiful space. My experience was SUPER bien, as they would say it. From the traditional European bars to the beautiful museums, there is absolutely nothing that this gorgeous city would let you miss. I went to Madrid for 4 weeks to study a course on Spanish with the institute AIL Madrid. Before going, I had already completed the A2 level at Academia De Español which served as a strong base. In Madrid, I was allotted a batch of students who were nearing the end of their A2 level so I joined them for their last two weeks of A2, and then the full batch progressed to B1.
When I wanted to say something in class, I had to say it in Spanish while the class patiently waited for me to construct the sentence. As a result of which, I found myself rather silent that initial week. But it was the right way to learn. Just hearing the language being spoken all around you gives you immense exposure, and helps you recognize words that are being spoken, and relate them with what you have learned. This mental co-relation is what took time at the start. But from then on, it was an upward learning curve. Soon I started understanding everything that was being said in class and started to actively participate in the discussions. Our professor was fantastic and had a really good sense of humor, which just made the class all that much more fun. We would often spend over an hour just discussing generic issues, which would help us practice speaking. Our professor would give us a lot of homework every weekday, but none whatsoever over the weekends which struck a neat balance.
Another great aspect of the program is that I got to meet so many people from so many different parts of the world. The diversity was incredible, and getting to interact with so many different people was an incredible experience.
Part of the program is for AIL Madrid to put you up with a host Spanish family. This really helped because it gave me insight into the Spanish culture first-hand. Also, the host lady only spoke Spanish so anytime I needed to communicate with her, it had to be in Spanish. At first, when I was lacking the vocabulary for a word I would whip out my phone and use the English -> Spanish dictionary while she waited. Soon, that became redundant and my progress was evident. The food was a slight problem. My breakfasts and dinners would be cooked by her, but since I am a vegetarian, it posed a problem because she had limited knowledge of vegetarian food. Though the food was not well-suited to the Indian pallet, it was good enough and I really enjoyed the dinners together. The family was very sweet and welcoming and I felt right at home.
Every evening, there was some or the other activity where one of the people from AIL Madrid would be the host. Some of the activities were: going to a museum, taking a walk in xyz neighborhood while the host would serve as a guide, learning recipes of typical Spanish dishes, riding a bicycle along the Madrid River etc. These activities were very enjoyable and gave you a sense of how Madrid is as a city.
All in all, it was one of the best and most enriching experiences of my life. I would definitely recommend it to everyone. I would love to go back. AIL Madrid is a Spanish language school with one of the most innovative ways of teaching and interaction. In the 4 weeks I spent there I went from speaking no Spanish to being able to have a decent conversation. A normal day at AIL looks like – there are 4 hours of classes in the afternoon , in the evening there are activities which help you get familiar with the Spanish culture and monuments and mix with other students outside of your class. At night, there are intercambios that give you an opportunity to interact with the natives to make your stay there memorable. The staff is amazingly friendly and helpful. Every Friday there is noche de copas where the staff and students get together at a bar which is a brilliant idea to break the ice. The location is also ideal as it is just a 4 minute walk from the metro station. The host family is so endearing that in no way you could feel the absence of your family back home and the fact that they speak no English is a force for you to make use of Spanish for the most basic conversation. Academia de Internacional Lenguas is a Spanish teaching institute in the heart of Madrid. I studied there for a month last year and I started loving the language and the culture even more than before.
Their faculty for conversational and written Spanish are very good but what I loved about this institute is that they formulate the curriculum in a manner which teaches you more about Spain and the lives led by people there.
The more you learn the more you want to be a part of that environment. Every evening they have activities planned for students which take you to local hangouts and cultural hotspots of the city. The insight these kinds of recreational activities give you is incredible.
I loved my experience with AIL and would recommend it anyone who likes Spanish. I just returned back home from one of the best educational experiences of my life in Spain, all thanks to AIL, Madrid. My course was a three months intensive course. The faculty at AIL, Madrid is extremely helpful and they have always kept the environment so lively. One of the best thing about AIL, Madrid is that they always make you feel at home!!! They are young & lively and always ready to help when in a problem. Even after leaving I still feel like a part of the AIL family Learning a new foreign language is always a task but thanks to the activities and the interactive classroom discussions I felt more confident. I was in Susana’s class for three months, she was a teacher and a friend to me. She has always given us interesting examples to make the topics much easier. The school had put me in a loving Spanish family according to my preferences regarding the food and the location of the house from the school, I was really grateful to have spent three beautiful months with a family that shared their experiences and taught me so much about the Spanish culture. Noche de copas was the best way to start off the weekend, I always looked forward to it. You get to meet and interact with students from all batches. That’s the way you meet people who share similar travel interests and are equally passionate to speak Spanish and learn everything they can about the culture. All the formalities before arrival went smoothly since the school is highly organized and professional. The school is centrally located so after class you can spend time in the Retiro Park which is 2mins from the school. I highly recommend the school to all those who want to learn Spanish. They offer various courses. Study here and have a fabulous culture and language experience!!

I went to Spain for a period of 6 weeks to improve my Spanish with Hispania in Valencia. In the early days in Spain, I could only understand when others use to speak to me, but when asked about anything in Spanish I would require plenty of time to reply. In the host family where I lived, it was mandatory to speak only in Spanish as nobody in the host family knew English and in the school not everyone could speak English. I believe that the more you live in a country the easier it is to learn the language. Hence, slowly yet steadily I started gaining the confidence to speak. In the school they used to teach us with lot of activities and used to choose one particular theme on which we had to either debate or play games or answer questions or simply discuss about the theme. The professors were also more like friends & hence it was very easy to communicate with them about our doubts and recommendations regarding various things. The entire batch became like a whole big family, even the professor & we sometimes used to hang out after school hours. Every evening the school conducted several activities like flamenco show, cooking, or visit to any museum etc., which helped us to make friends even outside the batch. Also, there were classes conducted on the beach at times. Every weekend there were day trips organized by the school to nearby & hidden places which made the weekends a bit enjoyable & relaxing.

I had completed B2 here in Mumbai. Hence, after few weeks I could very easily understand TV shows, movies and sing songs in Spanish.

To summarize, it was a great experience. It was not only about learning a language but it was a complete mixture of culture, friendship and so much more. I would definitely recommend anyone to have such kind of experience at least once in their life & I will surely like to go back.